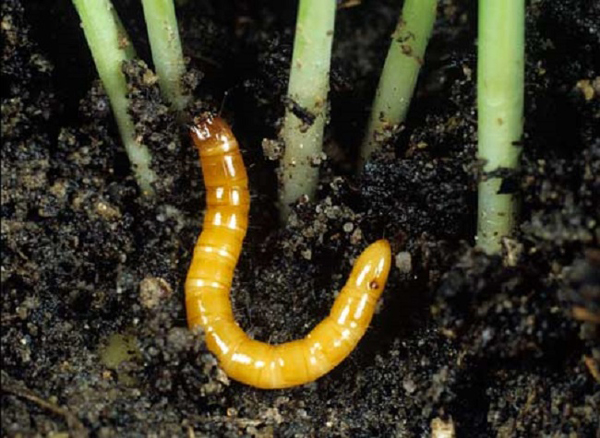 One of the most dangerous pests of tomatoes is the wireworm. So called the larva of the beetle beetle, which lives in the soil and feeds on rhizomes and tubers of garden crops.

The number of ovaries and the size of the fruit on the bush depend on the health of the tomato root system, and if it is significantly damaged, the plant may die. As a result of the activity of the wireworm, the planting yield is reduced several times. 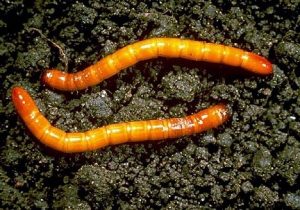 Adult click beetles do not cause direct damage to tomatoes, the larvae are dangerous. Each female lays up to one and a half hundred eggs. Larvae appear after 3-6 weeks, depending on the weather and soil type. The warm and humid microclimate of greenhouses makes the conditions for greenhouse conditions as favorable as possible for the pest.

Juveniles have an elongated and soft white body. During this period, the larvae are most vulnerable to biological agents. With age, their shell becomes more durable, acquiring orange-brown color. In this phase, insects stay for three years, pupation occurs in the fourth year. Even in conditions of open ground, the larvae are not afraid of winter frosts, climbing into the soil to a depth of half a meter.

The wireworm is greedy, especially dangerous for planting two- and three-year-old larvae. Basically, the pest feeds on the roots, but penetrates the stalk, reaching the shoots and even the flowers of tomatoes. In this case, the larva can reach 5 cm in length, seriously damaging the plant tissue.

In tomato bushes, affected by the wireworm, growth slows down, curls, turn yellow and dry leaves. The rotting of the tissues around the gnawed by the larva moves begins. Plants become more vulnerable to fungal and bacterial diseases.

From the larvae of tomatoes can move to other cultures. Wheat, sunflower, corn and barley, as well as some of the roots - potatoes, beets, carrots, and onions - are affected by the wireworm.

Insect excretion is possible only with an integrated approach to the fight, including the treatment of plants and soil with insecticides, the use of traps and agrotechnical techniques.

Agrotechnology in the fight against pest

It is believed that it is almost impossible to expel the wireworm from the site, therefore all agrotechnical measures should be introduced into the permanent plan for the care of the most vulnerable crops. In this way, the pest population is kept to a minimum.

Autumn digging (suitable only for greenhouses with collapsible design).

It is necessary to wait for stable frosts, dig up the soil to a depth of 15-20 cm and immediately after that remove the shelter. The larvae that did not have time to go into the deep layers of the soil, will be on the surface and freeze. But it should be noted that the wireworm survives at temperatures of -2 ... -4 ° C for several days.

In the framework of the fight against wire, only mineral nitrogen-containing fertilizers are embedded in the soil: ammonium sulfate, ammonium nitrate, and urea. The procedure should be carried out in the spring, before planting tomatoes in the greenhouse. Fertilizers are scattered dry on the surface of the soil and make digging. After this, the beds should be watered. 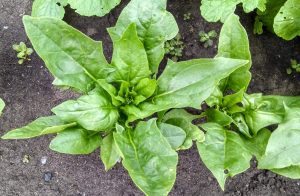 Next to the tomatoes should be planted plants that the wire does not like - legumes, white mustard, radish, spinach, rapeseed. Between the rows you can sow annual flowers - dahlias, phacelia, lupine. From perennials fit clover, alfalfa, sweet clover.

Rare loosening in the ground creates a favorable environment for the wireworm.

The wireworm feeds not only on cultivated plants, but also on some weeds, most of all preferring creeping wheat grass. It is necessary to clear the area of ​​weeds, preferably, while removing the grass roots from the ground. Harvested weeds should be burned, since the larvae can be found in their stems.

It is easiest to lure a pest into a trap during a period when the larvae have not yet gone into the ground for the winter, and food is scarce, that is, after the harvest of the tomato crop. After removing the tops and roots from the garden, it is necessary to bury several potato tubers in different planting areas. The depth of the bait is 10-15 cm. These areas should be watered several times to attract more larvae. After 3 days, the potatoes are dug out and burned, and new tubers are placed in the ground in other places. 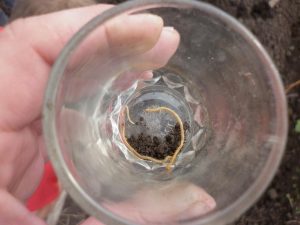 Potatoes can be pierced with a stick or tied to a fishing line to facilitate the extraction procedure. For greater reliability, it is recommended to treat the tubers with poisons that are used to protect potato plantations - Prestige, Celeste, Cruiser, and others.

Instead of potatoes, you can use beets, carrots, or sow corn or lettuce after harvesting. Plants should be dug before the onset of cold weather, so that the wireworm would not have time to go into the ground. Manure and straw are suitable from non-food baits: spreading them in small groups on beds, in a few days you can find clusters of larvae under them. All traps must be burned.

Despite the fact that the pest loves wet soils, you should not try to “smoke” the larvae, depriving the plants of watering. First, the lack of irrigation will have a negative impact on the volume of harvest and the taste of the fruits of tomatoes. Secondly, the drying of the soil will push the wireworm to move from the roots to the stems, which will only aggravate the situation.

To resort to processing plantings of tomatoes by chemical means should be only with a large infection with wireworm. It is necessary to choose substances that do not accumulate in the soil and fruits. These include: 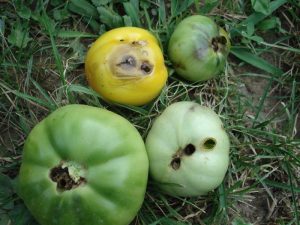 These funds are derived from the tissues of plants after the expiration date and will not poison the crop, if you do not use them during the fruiting period. But all substances are toxic, therefore, during the processing of planting should observe safety measures.

In a greenhouse, in all cases it is recommended, if possible, to give preference to biological preparations over toxic chemicals. To combat wireworm you can use:

"Home remedies" are less effective than specialized drugs, but are suitable for the prevention and control of a small pest population.

Preventing wireworms is easier than getting rid of the pest. Therefore, when planning planting tomatoes, it is worth considering both the obstacles and the appearance of larvae in the soil.

In the greenhouse pest, as a rule, falls together with the soil or manure. When updating the soil layer in the shelter, it is necessary to check the new earthen mixture, dig several potato tubers into it for two or three days.

Having found wireworms in the ground, one should tune in to a long and painstaking struggle. It is impossible to remove a pest in one season, but after 2-3 years of systematically carried out measures against it, it is possible to achieve a reduction in the insect population to an insignificant number. It is desirable to use all means of struggle, except for chemical treatments, in combination, this will provide a quick and stable result. 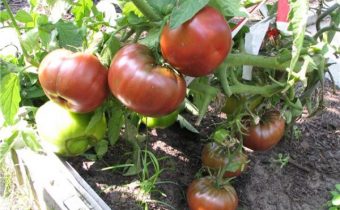 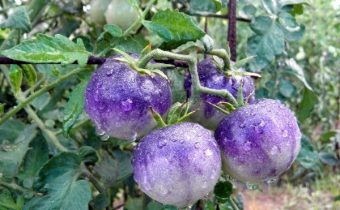 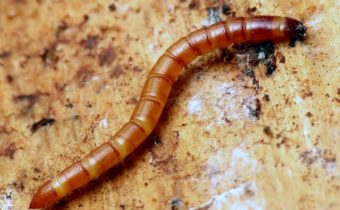 A complex of measures to combat wire
Previous post
Eden (oedema) on tomatoes from what and what to do?
Next post
How to grow "lazy" tomatoes - the original way