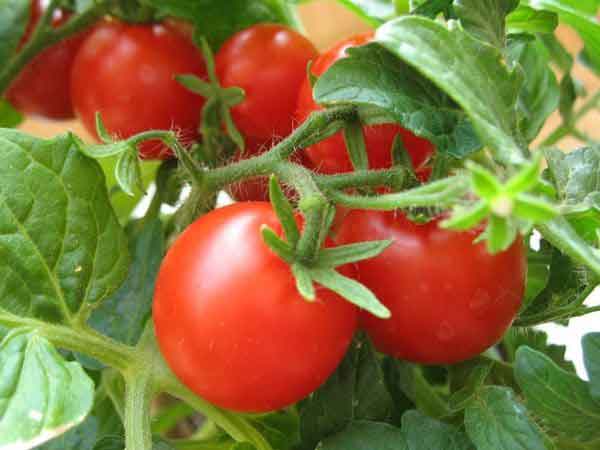 Against fungal diseases, special preparations are used, called fungicides. The most popular and effective of them is copper oxychloride (HOM). It is used on many crops, including tomatoes grown in greenhouses and on garden beds. During the growing season of tomatoes, they need to be protected from a number of common and dangerous diseases, including anthracnose and blight. How to do this with the help of XOM, read in this article. 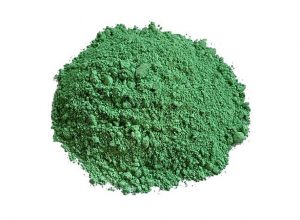 Domestic industry produces copper oxychloride in the form of green powder packed in plastic bags. For the population, packs of 20 and 40 grams are offered, and for large agricultural enterprises the fungicide is packed in cardboard boxes with a capacity of 10 or 15 kg.

The drug consists of 90% oxychloride copper, and the remaining 10% are filler. Getting on the leaf plates of tomatoes, means in diluted form, creates a coating of thin film. Due to this, the causative agents of fungal infection are unable to penetrate into the plant tissue.

HOM is practiced by farmers to protect vegetable and fruit crops from diseases of fungal properties:

HOM is a good analogue of Bordeaux mixture, but unlike it, it is diluted with water and immediately used for its intended purpose. But the Bordeaux mixture should be prepared for a long time according to a certain algorithm. If you continue to compare these two drugs, then in fairness, it should be noted that XOM is worse than the Bordeaux mixture, is fixed on the leaves and can wash off during the first rain.

To achieve a better fixation of the solution on the leaves, milk should be added to it in the amount of 1% of the volume.

Earlier, for a long time, XOM was the most used agent against fungi. Fungal forms are very afraid of the effects of copper, which explains the effectiveness and popularity of copper-containing compounds, including copper oxychloride.

Organic fungicides, which are also very effective, are now widely used. Therefore, HOM is not the only good drug against fungi.

Advantages and disadvantages of the application 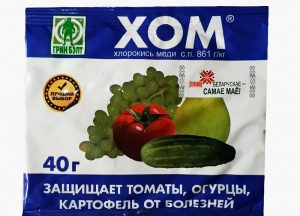 HOM not accidentally gained such great popularity among farmers. The advantages of the fungicide are as follows:

As with any agent, copper oxychloride also has some drawbacks. Among the minuses of the drug, the following can be noted:

Indications for use - from which diseases helps 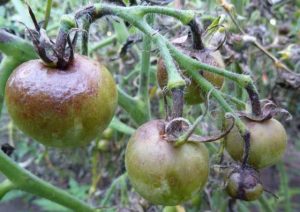 Beginning vegetable growers are interested in how the drug works, getting on the leaves of tomatoes, what is its mechanism of action. Immediately after the treatment, copper oxychloride penetrates the cell membranes of fungal organisms that cause such diseases on tomatoes as:

Since the pathogens of fungal diseases are not able to get used to this fungicide, it can be used continuously, not alternating with other drugs against fungi. HOM always gives 100% result.

A feature of copper oxychloride is that, having the ability to easily penetrate the membranes of harmful microorganisms, the components of the preparation do not penetrate the cellular structures of the tomato. The whole process takes place on the surface of the vegetative mass of tomato. Fungicide does not accumulate in the soil, because six months later, after application, it disintegrates into safe components.

With the help of copper oxychloride, tomato plants can also be cured of these fungal diseases, but only when the disease is in the initial stage and pathogenic fungi have not yet passed to sporulation. If time is lost, and the disease has had time to develop, then it is better to use more effective fungicidal agents.

Apply the drug on tomatoes is allowed in any phase of the culture.

How to prepare and apply the tool 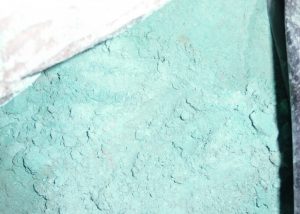 Chloroxide copper is designed for foliar processing of tomatoes. To perform the operation, you need to choose a suitable day so that there is no wind and rain. The operation is performed qualitatively, until complete wetting of all the leaves of the culture.

How to dilute the drug

Breeding funds are according to the following rules:

The resulting solution will be sufficient for processing on the leaves of tomatoes on one hundred square. The working solution should be used as intended on the day of preparation.

When diluting a product it is unacceptable to use metal containers. Chloride copper will react with the metal surface of the product and lead to its corrosion.

Spraying tomatoes with the XOM fungicide is allowed up to 4 times during the warm season. Treatments can be duplicated every 5 days. The optimal time of day for spraying is evening, since morning dew is also able to wash the product off the leaves of a tomato. 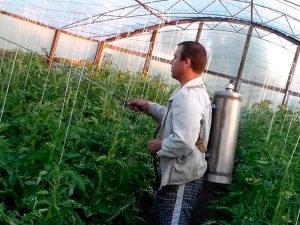 Chloroxide copper shows not only fungicidal activity. On some plants that have thin and permeable membranes, XOM can suppress individual pathogens of bacterial diseases. The scheme of the drug should have the following form:

If last year the tomatoes in your garden did not suffer from fungal diseases, then HOM for preventive treatment can not be used, but to use preventive biologics. However, if the neighbors in the cottage tomatoes are affected by fungi - it is necessary to practice it for prevention. 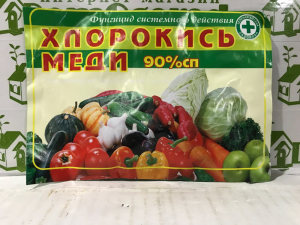 The drug XOM is classified as moderately hazardous to humans and warm-blooded animals. Therefore, when handling it, you need to take care of your health and adhere to the following instructions:

If suddenly the solution got into the eyes or on the skin, it is imperative to see a doctor. Prior to the arrival of the doctor, the victim is given first aid:

If copper oxychloride solution is in the gastrointestinal tract, never induce vomiting. This is fraught with serious consequences. 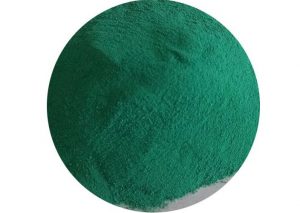 The preparation HOM is dangerous for bees, therefore it is necessary that they be no closer than 2 km from the place of processing and cannot sit on the flowers for 6 hours after spraying the tomatoes.

The storage place for this product should be a cool, dry room that children and pets do not have access to. Next to the drug should not lie drugs and food. Under normal conditions, XOM is valid for 5 years. After this period it should not be used.

People who used copper oxychloride in their practice speak very well of this drug. Read the consumer reviews below and see for yourself.

“Previously I used HOM only in the garden on apples and berry bushes. Last season I tried them to process tomatoes. The result turned out to be quite decent: throughout the summer season, not a single bush was affected by blight. Excellent tool, I recommend to everyone. ”

“Last spring I bought tomato seedlings on the market and bitterly regretted it. All seedlings were infected with blight. For some time I was even taken aback and did not know what to do to correct the situation. He began to look for recommendations on the Internet and met there a description of copper oxychloride. I bought several packages of the drug and began spraying. After the first processing, I did not find any positive changes. And the second spraying fully healed the tomato bushes. Even before the first spraying, he broke off all the sick leaves.After treatment, the bushes did not find new lesions until the end of the season.

“We, during the processing of tomato bushes with copper oxide, turned out to be an unpleasant situation. The spouse, while spraying the tomatoes, smoked several times and drank water. Then he felt unwell, and had to consult a doctor. Before the arrival of the doctor, we would unsolder it with activated charcoal and kefir. At present, my husband feels fine, and tomato bushes have fully recovered from a mushroom disease. ”

Chloroxide copper is very effective and inexpensive means used against fungal diseases on tomatoes. This explains its high popularity among farmers. XOM can be used on different cultures several times per season, without fear of habituation of the carriers of the infection to the drug. It is also important that the tool is well combined with other pesticides and fertilizers.