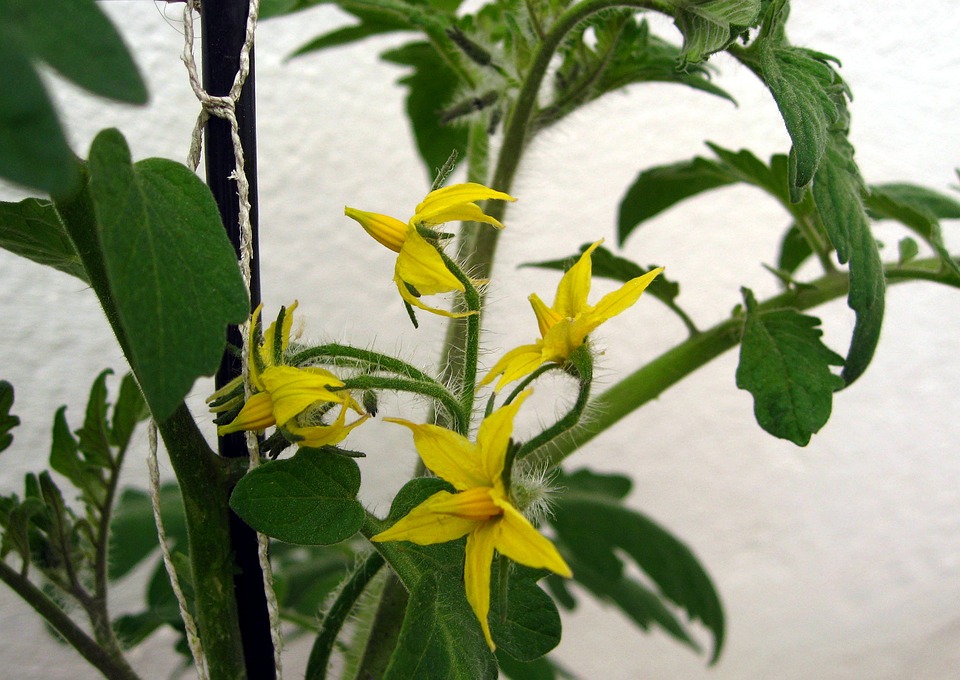 The appearance of the first peduncles on the seedlings of tomato gardeners are looking forward to with particular impatience. But if the buds began to form even before planting in open ground, the probability of successful transfer of bushes, high yields in the future is significantly reduced. With the wrong farming practices during the cultivation of seedlings, you can see flowering even a few weeks before the intended planting. To correct such a situation is real by adjusting the mode of plant maintenance. 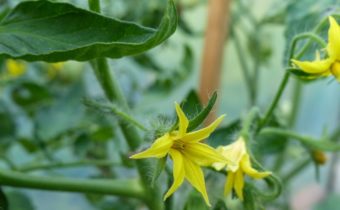 The flowering of young bushes is quite normal. Experienced gardeners know that the appearance of the first buds a few days before transplantation is a sure sign of the maturity of the plant. Tomatoes of all kinds and varieties are covered with bottom-up ovaries. This means that on the very top of the formation will appear then, when the lower ones will already form mature fruits and will completely disappear. Therefore, there is nothing wrong with the early opening of the buds.

However, lush flowering, the active formation of peduncles, especially long before transplantation, can damage the formation of other systems and elements. By the time of transplantation into the open ground, the tomato should have a branched root system, a thick and stable stem, lush greens that can get enough nutrients from sunlight. The key reason for the appearance of early and undesirable colors in violation of agricultural technology:

On a note!
Some varieties are allowed to replant even with the first ovaries of the fruit.

If the bushes were planted before mid-March, flowers may appear as early as mid-May, when disembarking is not always possible. The same happens if the room is too hot. As the bush grows, it is better to reduce heating, which not only stabilizes the growth of the above-ground part, but also becomes a measure for hardening future tomatoes. Gradually, the temperature is reduced from 25 degrees during the germination period to 18 or even 15 degrees in the period before planting in the ground.

If the gardener does not use complex fertilizers, and selects them independently, combines with folk remedies, there is a chance to enhance the development of one part of the plant, thereby violating the nutrition of all others. For example, high concentrations of superphosphates are undesirable, as is a large amount of nitrogen fertilizers in combination with potassium preparations.

Consequences of the phenomenon 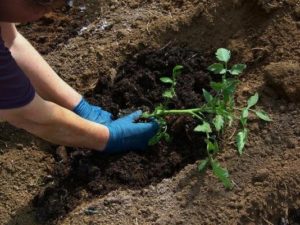 In most regions of Russia, natural conditions simply force summer residents to sprout seedlings early and plant bushes late not only in open ground, but also in greenhouses. therefore doing so already have with flowers. However, specialists in the field of agricultural engineering remind that if flower stalks have already developed, it will be impossible to avoid serious losses. Each brush dropped from a tomato is a lost crop. Up to five and even more fruits may develop from one formation, depending on the characteristics of the variety. Therefore, the main consequence of early flowering is a decrease in the total yield.

Flowers may fall off in other cases, but this always indicates violations in the development of the bush.

In some cases, especially when using the wrong fertilizers, flowers develop before the bush itself becomes strong enough.The stem may remain too thin, and the root system is undeveloped, a small number of leaves will also indicate a wrong growth. At the same time, when the first flowers appear, all the vital forces of the tomato will be thrown into the formation of the ovary, so the growth of the remaining parts will slow down. The survival rate in this case will be very low, the losses of the bushes themselves will be quite large.

What to do to stop flowering 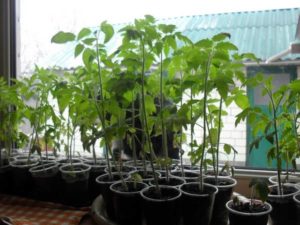 First of all, it is necessary to study the mode of maintenance of bushes and adjust it. Additional lighting is desirable to exclude, because it can stimulate the fast ovary of numerous colors. Slowing the growth of the entire bush, it is possible to exclude the further spread of flowering. Watering is necessary to reduce a little. Instead of once in two days, switch to the mode once every 72 hours, while at other times use external non-root humidification of the air. It is advisable to move the seedlings to a cooler place, where the temperature will not exceed 16-18 degrees, even in the daytime. If in the evening and at night in the room will be a little cooler, it will also stop the late growth.

It is necessary to exclude all fertilizers that stimulate the ovary and flowering. From folk remedies, these are various caffeine-containing substances, as well as mixtures with the addition of live yeast. Mineral fertilizers are nitrogen and phosphate concentrates. It is advisable to switch to those complex supplements that concentrate the strength of the plant on the development of the roots and the stem. In this case, survival rate will be much higher.

It is not necessary to remove flowers, it will not stop the appearance of new brushes. It is advisable to limit the growth of the ovaries. Pinch the greens in this period should not be. The active formation of the leaves can still continue. It is desirable to speed up the transplant in a greenhouse or greenhouse.

You can build a simple temporary greenhouse that protects well from wind and cold air flow. 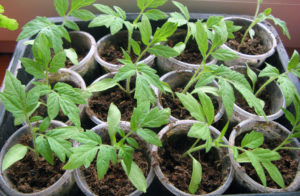 The first and main measure of prevention is the selection of certain varieties and the timing of their disembarkation. Supersteel species can ripen much faster, as regards not only the fruits themselves, but also the bushes. Later, on the contrary, bloom in another period. Therefore, you should carefully plan work with seedlings and bushes ready for transplantation, focusing on the climatic norms, lunar calendars, current forecasts for spring and summer.

Wrong signals about the need to start flowering can give excessive illumination, so you must comply with the rules. Optimal for seedling light day 14 hours long during the main time and 16 hours during the first stages of germination. Sometimes gardeners, especially beginners, seek to compensate for the lack of this resource by constantly switching on special lamps. The need for them disappears in most regions already in mid-April, which must be taken into account. 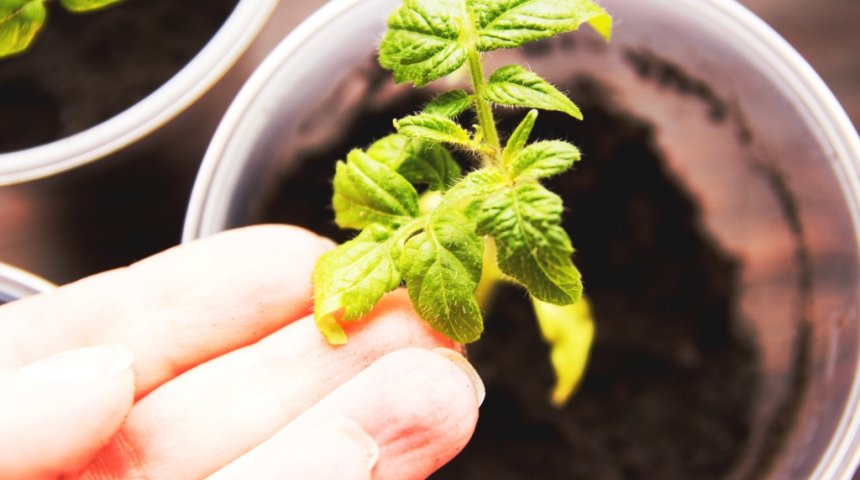 See also:
Tomato seedling thin and long, what to do?

Many gardeners and gardeners prefer to grow tomato seedlings on their own, without relying on market ...

If the tomato seedlings still bloomed, and this is not uncommon, you should not despair. It is important to properly maintain, plant in the open ground bushes. First of all, it is necessary to eliminate unnecessary mechanical movements, for example, the frequent rearrangement of the boxes and pots themselves. The pollen from the upper flowers will fall to the lower ones, thus pollination of the plant occurs in the normal case. But if the flower stalks appeared prematurely, the bush with small tomatoes, which most likely do not grow normally, will have to be replanted, they will only take away the power from the plant.

When transplanting need to further deepen the seedlings. The first flowers can even be cut off, making a mound of loose earth just to this mark.Thus, a tomato can let more roots get maximum nutrients and can provide the necessary nourishment for the ovaries even in such extreme conditions.

Tomatoes are well adapted even to the unfavorable climate, therefore, gardeners of all regions are especially loved. If you stop the flowering of bushes in time, keep the first ovary and stimulate the development of the roots, stem and foliage, you will be able to get an excellent harvest. However, you should initially take simple preventive measures so as not to risk planting.

How to get rid of slugs on tomatoes, once and for all?
Previous post
Coleslaw Salad
Next post
Cabbage stew with pork