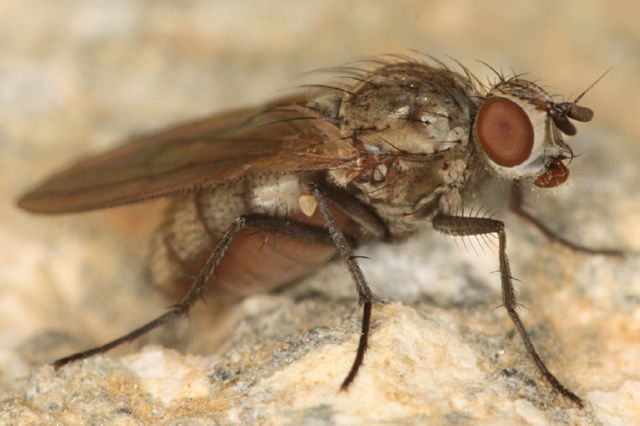 Poor germination of seeds can be associated not only with poor-quality seed, but also with some pests, such as a germ fly. It belongs to the order of dipterans, eats seeds and seedlings of various garden crops, including tomatoes.

Insect occurs almost throughout the territory of Russia, Ukraine, Belarus and Europe. 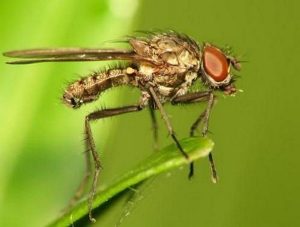 The body of the fly has a yellow-gray color, covered with hairs. The head is large, the eyes are large, the antennae are located on the forehead, they are responsible for smelling. A distinctive feature is the three brown stripes on the abdomen. The insect has two pairs of wings, the front ones they use for flight, and the rear ones serve as balancing. The body of an adult individual in length is usually from 3 to 6 mm.

Mating occurs around mid-May. For laying eggs, the female chooses a moist soil. The eggs of the germ fly are elongated, white, their size is about 0.6-1 mm. At one time, the female is able to lay from 50 to 60 eggs. After 2-10 days, the larvae of the germ fly appear. Under favorable conditions for the season the insect can bring up to 4 generations.

The larvae that were born, usually up to 1 mm long, the body is transparent. As it grows, it turns white. Before pupation, the larva becomes off-white, the body length can reach 7 mm, and the mandible is located at the front end of the body. Insects are very voracious, feed on germinating seeds, some insects. If food is not enough to eat last year's vegetation. This stage of development of the germ fly can take from 10 to 40 days. Faster growing up takes place in warm weather. The larvae pupate in moist soil, at a depth of 7-10 cm, the cocoon has a rigid structure, is colored in a brown-yellow color. They hibernate in the ground, at a depth of 10-12 cm, and with the advent of heat they creep out to the surface.

A distinctive feature of the males of germ flies are hairs comb-shaped on the hind limbs.

The first signs of the appearance of pests on the site will be poor seed germination, weak and lifeless sprouts, as well as the presence of germ flies near the tomatoes. It is rather difficult to notice the larvae, because they are in the soil.

Adults do not harm the seeds or sprouts, their main vital function is reproduction. Larvae that feed on various garden crops cause great damage to plants:

They can also gnaw through the roots of grasses that are eaten by farm animals, penetrate into cotyledons, and damage the place of emergence of the germ, in the tubers of the larva eat cavities. 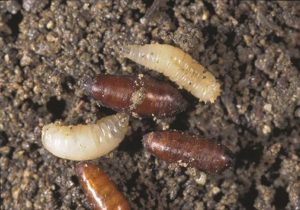 In order to prevent the emergence and spread of pests should follow a few simple rules:

The larvae are very voracious, they can even overcome a long distance in search of food. Finding seeds, they gnaw cotyledons, such grains either do not grow at all or will grow very weak. Also, damaged seeds will be more susceptible to various diseases. You can fight pests using biological methods, as well as chemical and folk remedies.

If pests have appeared on the site, natural enemies of the germ fly will come to the rescue. To reduce the number of insects will help aleohara beetles, as well as ground beetles. It remains only to find the very enemies and bring to the site. 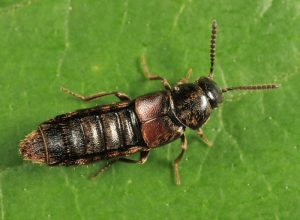 Apply only with a small number of pests or for prevention. From the larvae of the germ fly on tomatoes, tobacco extract is perfect; it is easy to prepare it:

400 grams of tobacco is poured with hot water, the liquid is drawn for two days. After filtering the infusion through gauze and diluted with water 1: 1. The resulting infusion sprayed landing.

The effectiveness of treatment will increase if 80 grams of laundry soap are dissolved in the infusion.

When buying seeds, you should pay attention to the packaging, it is better to choose those treated with parasite preparations. But you can do it yourself, first the seeds are treated with flour paste, and then with insecticides. Excellently proven drug called "Spark", it is completely safe for plants, but destructive for different types of insects. When eating pickled seeds, the pest paralyzes, and it gradually dies. Also, "Iskra" can spray the seedlings, to prepare a solution, one tablet is dissolved in a bucket of water.

Some gardeners recommend to introduce granulated insecticides into the soil before sowing.

Sprouting fly - a dangerous pest, insect larvae can destroy most of the crop. Damaged seeds will produce weak sprouts, naturally the yield of the bush will also be low. The fight against the germ fly should begin immediately, otherwise the population will increase several times over a short period of time. 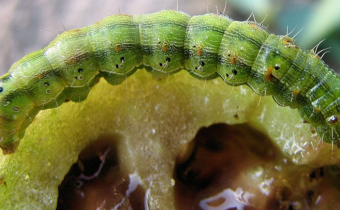 How to deal with a garden scoop on tomatoes? 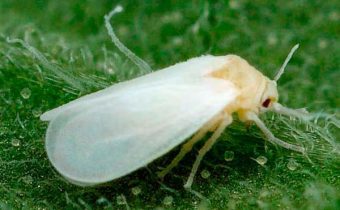 How to get rid of whitefly on tomatoes 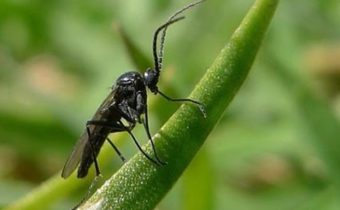