To decide which variety you need, you must take into account the climate in your region, soil fertility, as well as when and what fruits you want to receive. For example, you can look at a tomato "Rocket" - a description of the variety, characteristics and reviews will be described in this article.

What kind of tomatoes "Rocket"?

"Rocket" - this is one of the varieties that gardeners are very respected. And the thing is its good yield, taste and compact size. Bushes do not grow more than half a meter, so they do not need a garter. Also, they do not have many leaves and unnecessary branches. And this saves a lot of space, which is very often relevant, because you can plant more than other crops. Yes, and less will be formed stepchildren who would shade the fruit, demanded a lot of time for their tearing.

Tomato "Rocket" is designed for cultivation in the open field, where it is transplanted after the seedlings were grown. It is sown late - in late March-early April. Days are determined by the lunar calendar annually.

Always check seed germination before planting, it is also better to buy more sachets, as germination is not always the same from different manufacturers.

To check and disinfect the seed, it can be soaked in potassium permanganate (a weak solution) right before planting. After which the empty seeds, which are hot, remove, wash well and dry.

You can also hold the seed in any nutrient solution such as "Epin" to improve germination. Such drugs stimulate the appearance of uniform and rapid shoots.

Transfer to the open ground is carried out in the third decade of May - June. Seedlings can be planted tightly. It is possible and less often according to the scheme - 40/50 cm.The first crops are rocket tomatoes, the cultivation features, which are very simple, will be given in the second decade of July.

While tomatoes grow, they need to be constantly watered, it is better to use soft, warm water, which is poured into watering cans the day before watering. But the grade is unpretentious, it is possible to water and just from a hose. As the stepsons appear, they need to be removed. After watering, do not forget to loosen. You can also make 1-2 feedings that can be alternated in the form of organic and mineral store preparations.

Also, do not forget to inspect the seedlings from the appearance of the Colorado potato beetle, as the variety is immune to disease, but nobody will save it from the parasites, except for you.

We told you about a very good variety of tomatoes. They will not require you to spend a lot of time, material and labor. Therefore it is worth considering this variety.

Tomato "Explosion". Characteristics and description of the variety 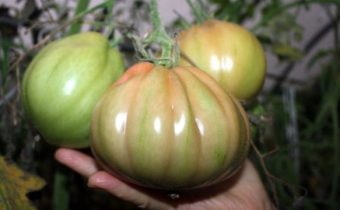 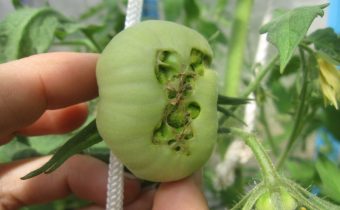 Diseases of tomatoes in the greenhouse and their treatment
Previous post
Ways to grow tomato seedlings
Next post
Tomato "Explosion". Characteristics and description of the variety