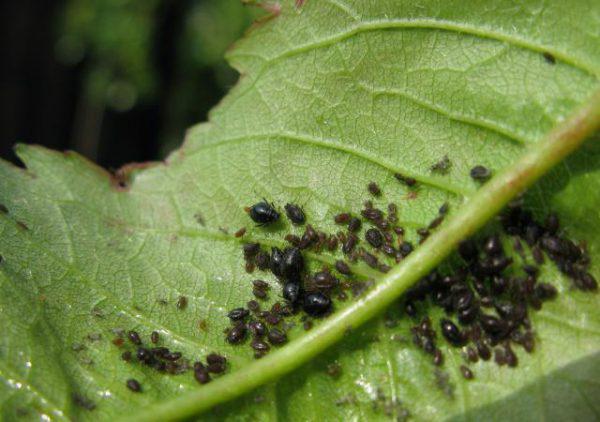 Gourd aphid affects many crops, in particular tomatoes. Settling on the underside of the leaves, the insect sucks all the juices from the young leaves, as a result of which the plant dies.

Once on a tomato bush, the aphid spreads quickly throughout the garden, not giving a chance for survival to either young or mature tomatoes. 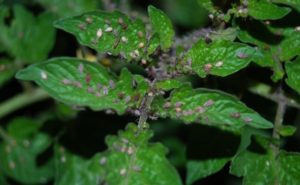 In nature, there are more than 3 thousand species of aphids. Gourd aphid (it is also called cotton) is a tiny creature with wings (there are individuals and wingless), 1.5 millimeters in size. It belongs to the family of aphids. The Latin name is Aphis gossypii.

The color of the pest's calf can be different: yellow or green with dozens of variations of shades. The body is oval, elongated. The insect has a small proboscis, which pierces the leaf plate and pulls nutrients from it. Visually, the adult resembles rice grain. The product of the life of an insect is a sticky sugary substance (honeydew), the so-called pad.

With its sweet aroma, the pad attracts ants, which act as protectors for melon crops against other insects. There are cases when aphids winters in an anthill. And with the arrival of warmth, the hospitable hosts transfer lodgers to plants.

The main features of the parasite - gluttony and fecundity. This creature can be called omnivorous, because apart from tomatoes, it loves to feast on melons, watermelons, cucumbers, and zucchini. If time does not take measures to destroy the pest, then on tomatoes it can give for the summer up to several generations. Only females participate in reproduction.

Wintering sites for larvae of aphid and females - wingless virgins - basal leaves of perennial grasses, remnants of vegetable plants, as well as various sheltered places protected from the cold. They especially like to accumulate in greenhouses: in a warm climate, they are able to develop throughout the winter period. In the spring, as soon as the temperature rises above 5 degrees Celsius, insects of all orders are activated: the larvae crawl to the seedlings, and the adults fly away in search of juicy grass. At the same time, they lay hundreds of eggs on weeds, and if seedlings are already planted in the greenhouse, the laying is done right in the leaf axils.

The activity of the pest on tomatoes is somewhat reduced in mid-summer, when it becomes too hot. In addition, natural enemies — large insects and birds — help to significantly reduce its population in summer. In the beginning of autumn, a new wave is observed - with the advent of a more comfortable temperature, the aphid returns to the tomatoes, with even more zeal it begins to devour the leaves. On melon crops aphid can develop up to the onset of frost.

This is a frost-resistant insect that can withstand temperatures down to -10 degrees. A pest can die at lower temperatures, as well as during a sharp increase in degree to a 30-degree mark.

Signs of aphids on tomatoes 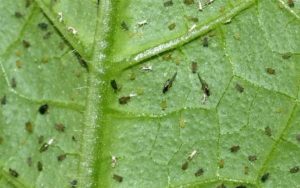 The melon-field is located on the lower side of the leaves growing on young stalks, shoots. Symptoms of aphids on tomatoes:

If you look at the leaf plate, you can notice a dark, infested mass - this is a rapidly reproducing aphid. Sucking vegetable juices, it disrupts the process of photosynthesis in plants. But besides this, the aphid by its influence poisons the plant with toxins. Because of this, the plant can not consume adequate amounts of nitrogen. Tomatoes become weak and vulnerable. Leaves, shoots are deformed, dry out, fruits become small and clumsy. Their taste spoils.

To combat aphids, if she managed to increase her family, it is possible only with the help of chemical insecticides. In case of a small population, it is possible to get rid of the pest using biological preparations or products prepared on the basis of natural components. It is noted that many folk remedies quite successfully cope with melon, if it has just appeared on the tomato garden.

If the aphids on the leaves is small, then it can be destroyed manually, crushing between the leaves. Strongly affected leaves are best removed from the bush, burn outside the garden. It is also worth eliminating weed residues that are lying on the ground - pests also multiply in them.

The easiest way is to sprinkle the tomatoes using sprinkler irrigation, so the parasites will be washed off with a stream of water. However, this will not mean that you won: only one battle was won, as the aphid from the garden did not go away, but only got on the ground. Soon she again attacks tomatoes.

Experts recommend attracting aphids to catch her natural enemies - insect predators. As you know, ladybugs, golden-eyed, spiders, beetles, wasps, and birds are not averse to try a dozen individuals at a time. To increase the number of beneficial insects on the site, you can use sweet baits, setting feeders and birdhouses.

In the early stages of infection to cope with aphids can folk remedies. They are harmless to plants and humans, they can be used many times per season. Numerous solutions, infusions, various broths spray tomato bushes and the ground beneath them.

To leave a useful solution on the leaves for as long as possible, you should always add a little soap into it.

Chemistry is recommended to use if the number of pests has reached global proportions and other means can not cope with the problem.

Chemical insecticides can be used only before and after flowering, as well as during the formation of fruits. 21 days before harvesting, treatment with poisons should be stopped, otherwise the toxins will get inside the fruit. In this case, tomatoes will become dangerous for consumption. 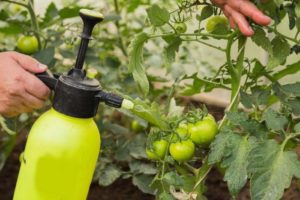 The use of chemicals can be detrimental to tomatoes, if the dosage is broken. Therefore, it is important to follow the instructions. So the bushes can be treated with the same karbofos, which cultivate the land when digging, but then the dosage will be reduced almost twice. For therapeutic spraying, you need to take only 40 grams of the drug per 10 liters of water. When processing plants, it is important to pay special attention to the underside of the leaves - this is where melons are accumulated. 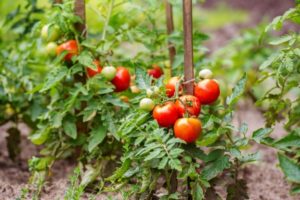 In contrast to chemical agents, biological ones are created on the basis of living microorganisms — fungi and bacteria, which fully show their effectiveness in combating harmful animal life.

To avoid the appearance of insects on tomatoes, using timely protective measures.

Aphids are attracted to such plants as viburnum, narustiya, kosmeya, begonia, poppy, linden, mallow. Therefore, tomato beds should not be placed next to these bushes.

Gourd aphid - the most malicious pest of tomatoes. It causes severe damage to landings, depriving the cottager of most of the crop. It will be difficult to cope with a rapidly growing population, however, it is much easier to destroy a pest on time than when it multiplies its colony many times. Combating the parasite needs to be carried out in a comprehensive manner: competent agricultural engineering, prevention and regular insecticide spraying will help win the war for the harvest.