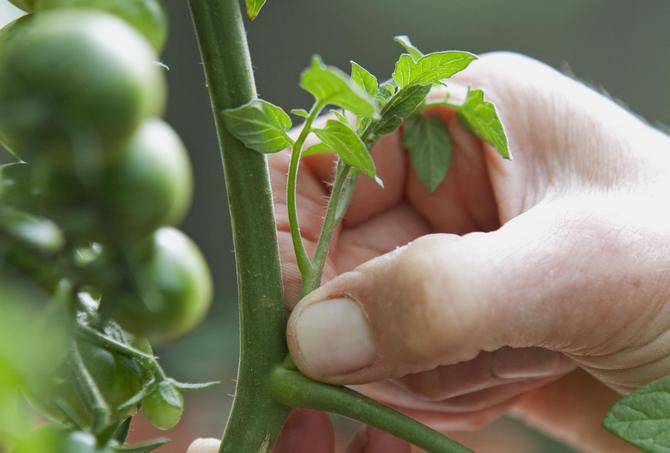 Tomatoes - the culture is not too whimsical, especially if you choose suitable for the area and climatic conditions high-yielding hybrid. But some care requirements still exist and must be met. Most of all, beginners and experienced gardeners are frightened by stepson, although there is nothing difficult in this process.

What is pasynkovanie and why is it needed? 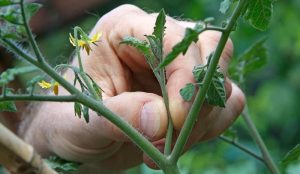 From all the sinuses of leaves on the stems of tomato grow processes. These young shoots take a lot of strength from the plant, but they don’t bring any sense. The process of removal of these processes is called pasynkovanie. If it is not carried out, the force will not go to the fruit, but to the development of young shoots, and this will affect the yield, the taste characteristics of the fruits, and their appearance.

Practically all varieties of tomatoes need to be staved. Very rarely, varieties do not require the formation of a shrub. Most often this standard. They belong to the determinant, grow to 50 cm and form only 2-5 brushes with fruits.

The most difficult thing is to identify the stepson. He, like the main leaf, grows out of the same sinus, but is located above it. So, when stabbing you need to remove the top escape.

During the procedure, work in clean gloves, carefully breaking off the sprout, or use scissors, regularly dipping them into a saturated solution of potassium permanganate for disinfection.

When and how often do you need to pinch? 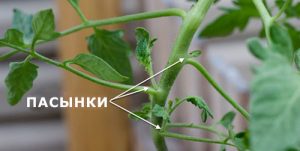 It is possible to start stuttering 2–3 weeks after transplanting seedlings to a permanent place. By this time, the first brush is almost always formed on the tomatoes and the stepson is located directly under it. In the future, it should be regularly, at least once a week or 10 days to conduct inspection of plantings, removing the young growth.

Remember, the sooner the stepson is removed, the less effort the plant will spend on it. It is optimal to carry out the removal until the process reaches a length of 5 cm. It should also be understood that the larger the stepson, the harder the tomato will tolerate the procedure, and there is also a great risk of injuring the main stem and harming the whole plant.

Be sure to handle the place of cutting or breaking stepsons solution of potassium permanganate. This will help avoid infection by planting fungi and viruses.

Also, experts advise to carry out the procedure in the morning, so that until the evening the wound on the stem is delayed.

Always start working with healthy bushes! If the plant is weak or sick, you can skip it. Masking, even by all the rules, causes serious stress.

How to pinch tomatoes in the greenhouse?

Above, we wrote that it is possible to use scissors, but still it is optimal to do a hand pinching, carefully tearing off an unnecessary process with fingers.

In this case, be sure to follow these recommendations:

Different varieties require the formation of a different number of main stems. Consider how to do it right.

It is best to wear rubber sterile gloves during staking. Hands directly into them can be regularly disinfected in potassium permanganate. And it is necessary to do this, otherwise, along with the juice that is released when sprouting is removed, the infection can be transferred to other tomatoes.

Certain varieties of tomatoes are formed in one stem, and most often these are indeterminant tomatoes or those grown in closed beds. In the first case, this ensures the maximum discovery of the “talents” of the plant, and in the second, it is also carried out for practical purposes. In the greenhouses and greenhouses thickening is unacceptable. This not only reduces the yield by limiting the supply of air and light, but also contributes to the creation of microflora favorable for fungi and viruses.

The formation is as follows. Under the first brush forms a stepson. His and all lower leaves must be removed. This will significantly increase the flow of fresh air to the bottom of the plant. Next should be regularly staving. With timely cutting off a young plant on one plant, 40 or more brushes can be formed. 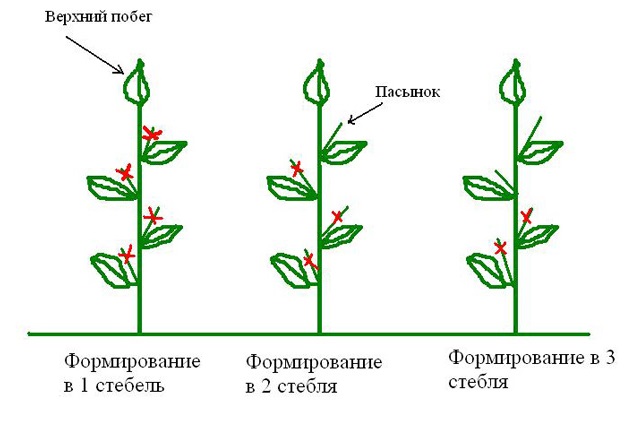 This method is used if there are such recommendations for growing a variety. It can be applied to determinant and indeterminate tomatoes, but in the second case, you may need to remove the top point of growth.

When forming two stems on a plant, the thickest of the stepsons formed under the first brush are left, and the rest are removed, and the leaves too.

If the formation will be carried out in 2 stalks in a greenhouse, it is necessary to locate the plants further from each other, so that everyone has enough light, and water, and air.

Tomatoes are formed in three stalks approximately as well as in two, only if the first main stepson is left under the first brush, the second one, which will serve as the third stem, is left under the second or third brush. This method of forming a bush is quite rare. More often in low greenhouses. In this case, all the growth points of the three stems are pinched. Otherwise, the plant simply does not have time to form a sufficient number of ovaries and give a good harvest. 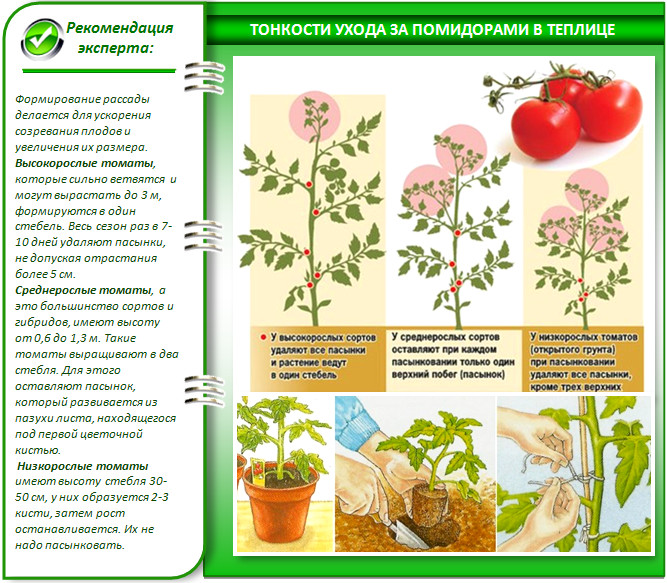 Features of the formation of different varieties of tomatoes

The formation of a tomato bush depends on its variety. Everything can be divided into:

Indeterminate Tomatoes can grow up to 3 meters or more in height. Most often they are formed in one stalk, but sometimes, and most often in two greenhouses, a formation in two stalks occurs. It is believed that in this way they will produce more fruits, but this is possible only under the condition that there is no thickening, otherwise the tomatoes simply cannot develop normally.

Optimally planted tomatoes indeterminantnyh varieties at a distance of 1-1.5 meters from each other, if they will be formed in one stem and up to 2.5 meters, if the adult plant will have 2 stems. 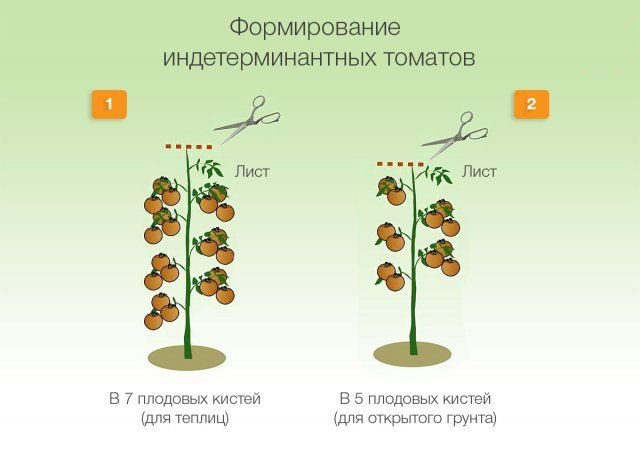 These varieties are unpredictable. They can stop growing at a height of 50-60 cm, and can grow up to one and a half meters. Therefore, it is optimal for them to use the formation in two or three bushes, while pinching the growth point of the main stem so that a sufficient number of ovaries can form on the additional ones.

These varieties of tomatoes always stop growing after laying a maximum of 5 brushes, but can reach a height of up to 1.5 meters. If the grade chosen by you is small up to 80 cm, then stading can be excluded from the list of treatments carried out for planting care. But if the plant promises to be higher, it will not hurt to remove the shoots, having formed it in 2,3, 4 and even 5 stems. then there is the likelihood that 4 brushes are formed on each one, which means that the harvest will be much higher than expected. Although some experts argue that the formation on determinant varieties more than two stems will affect the size of the fruit.

It is necessary to learn not on our own, but on the mistakes of others, so before proceeding to the strawing of tomatoes, we recommend that you familiarize yourself with the shortcomings that the rest of the gardeners most often allow, and avoid them.

Masking is a necessary process for growing almost all varieties of tomatoes. But if you hold it wrong, you can not only not achieve the expected result, but also weaken your plants, provoke the development of diseases, etc. Most often, gardeners make such mistakes:

By following the simple recommendations and making the stepson tomatoes as your usual business, you can achieve an excellent result. For example, those who do this procedure according to the rules for the first time, notes an increase in yield by 2-3 times, and in addition, the appearance, keeping quality and taste characteristics of fruits are significantly improved. 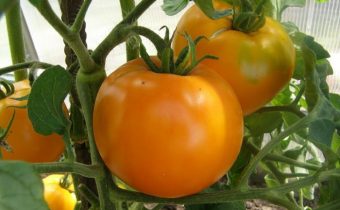 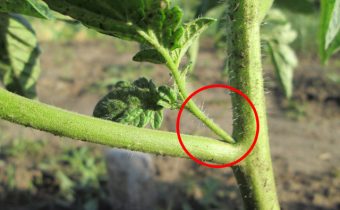 How to distinguish stepchildren on tomatoes from floral brushes 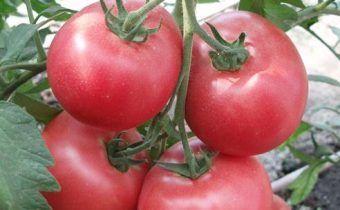 Description of a variety of tomato "Wild Rose" 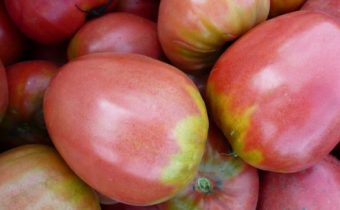 Tomato "Sevryuga": a demanded variety among vegetable growers
Previous post
How to feed tomatoes after planting in the ground
Next post
If tomatoes zhirut, what to do?