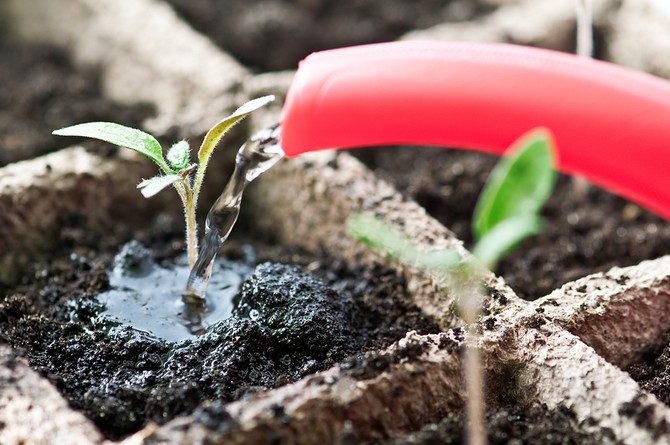 To get healthy and chunky tomato seedlings, it is important to know the finer points of watering. For beginner gardeners who are not yet knowledgeable in this matter, the question always arises: “How often should you do this?”. And for good reason, in fact competent watering gives a fertile harvest. Each stage of the seedling life has its own requirements for the presence of moisture in the soil and its own characteristics. 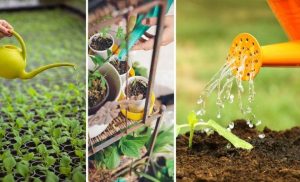 Watering after sowing seeds in the ground

Before sowing, the soil is well moistened with warm water. Then tomato seeds are laying and sprinkled on top of dry soil. Capacity covered with a film or glass, thereby creating greenhouse conditions. It is not necessary to water before the first shoots.

Care must be taken to keep the film wet, i.e. condensation has formed.

Watering after the appearance of the first shoots

After emergence of shoots the film is removed. Tomatoes, in the first 2-3 days, do not water, because the sprouts have enough moisture from the soil that was originally moist. Further watering should be depending on how quickly the earth dries. Watering is carried out at the very root of the germ, avoiding droplets on the leaves.

Take enough water to soak the soil to the full depth. Further watering is carried out only when the top layer of soil is completely dry. 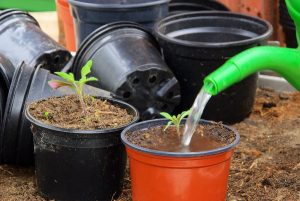 2 days before the scheduled day of the picking, seedlings should be watered. By this time, the ground will dry, but it will still be wet. 5 days after transplanting produce the first watering. Then it is carried out every 7 days.

It is recommended to use the pallet for these purposes, as the roots will reach for moisture and grow rapidly, and the root system will become more powerful and strong. Water that is not absorbed through the drainage holes in the tank is drained after a couple of hours.

Watering after planting seedlings to a permanent place 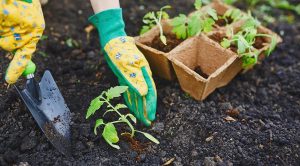 On the windowsill seedlings grow about 45-50 days. Plant growth reaches 30 centimeters in height, after which they are transplanted into open soil or a greenhouse. It is desirable to transplant on an overcast day - tomatoes will take root better.

Before planting, seedlings are watered and allowed to infuse for 2 hours, this reduces the risk of damage to the root system. The soil in which the landing will be carried out, moisturize. Seedlings do not water 2 weeks, it protects the roots from leaching, and they take root sooner.

In the future, the plants before flowering watered every 5-6 days with warm water. Use 5 liters of water per square meter. Watering should be at the root of the germ, trying not to fall on the leaves with water.

During the flowering period, the saplings are watered once every 4 days, increasing the volume of water to 15 liters per square meter. After the beginning of fruiting, the volume for tall varieties is reduced to 10 liters, and for short-growing varieties to 5 liters. This helps to avoid sour taste and cracks in the fruit. How to determine the lack of moisture in the soil?

The main mistakes when watering seedlings of tomatoes

Many newcomers are faced with gross errors that can lead to diseases of the tomato, and in the worst case, even death. 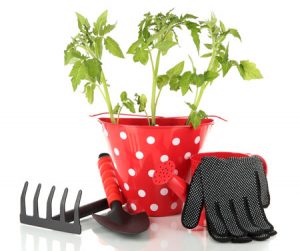 When performing watering is recommended to adhere to some rules to achieve maximum effect. Below is a list of recommendations that should be considered when performing irrigation.

The beneficial properties of tomatoes have been known for a long time: a storehouse of vitamins and microelements, reducing the risk of tumor formation, benefits in diabetes and kidney diseases, improving metabolism. In addition to all the above, the fruits are also very tasty!

Following these simple rules, small sprouts will eventually turn into strong plants and bring a bountiful harvest of tomatoes!

Tomato seedlings on the inner side of leaves have white spots
Previous post
What to put in the hole when planting tomatoes in a greenhouse?
Next post
Why tomatoes crack, how to avoid it?