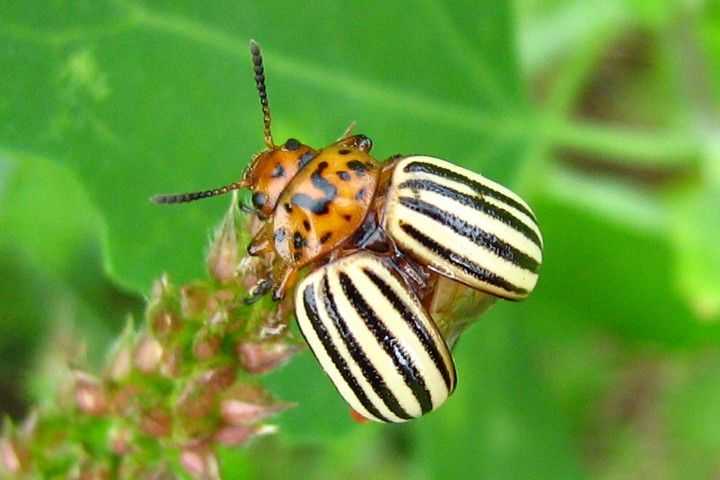 The Colorado potato beetle is the main enemy of gardeners growing potatoes. There are a lot of ways to fight, but it is not known which of them will give a good result, any mistake, as well as the use of ineffective means can turn into a loss of harvest. For many years, farmers have tested and identified several best options for dealing with the Colorado: drugs, folk recipes, plant repellents, etc. In any case, it will only be possible to completely get rid of the beetle if you take action in a timely manner. 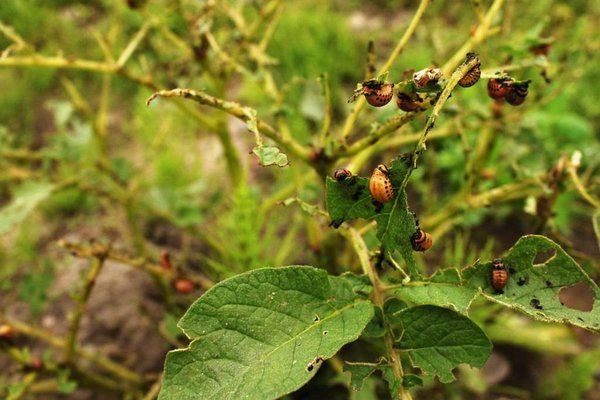 The main food of the insect is potato tops, one female lays more than 600 eggs, in a month a new mature (capable of laying) progeny leaves from them. Under favorable conditions, colonies of parasites can grow rapidly. If nothing is done, nothing will be left of the green mass of potatoes, the tubers will not grow, and the beetle will switch to pumpkins, tomatoes, zucchini, watermelons, eggplants.

The pest does not tolerate frosty, snowless winters, so it is more common in the south and in the middle lane, in the north the Colorado potato beetle does little harm.

The larvae overwinter in the soil, awaken en masse during periods of potato sprouting and budding, it is during this time that the leaves must be carefully inspected and started to fight. When the Colorado is full, he hides in the ground, so some methods of struggle may not give 100% of the result. 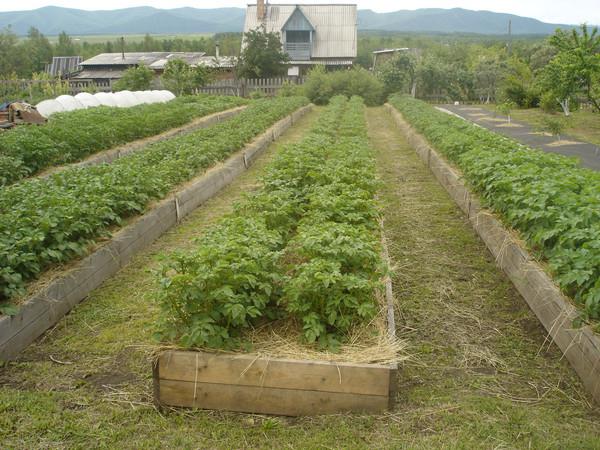 We grow potatoes by MitlayderThe technology of planting potatoes according to the method of Mitlider known domestic cottagers for a long time. Its author is American ...

Experienced gardeners are advised to use several tools at once, as even with a small number of voracious beetles can eat half of the entire haulm, which will reduce the yield by 20–30%.

Options for dealing with the Colorado potato beetle

It is easy to control the appearance of an insect in its own area; with the right choice of means, it is possible to get rid of it quickly and without extra effort. But what if the pest wound up with neighbors who are not trying to fight it. Insect, feeling the smell of a favorite plant, will quickly flick over to the already cleaned beds. To prevent this from happening around the perimeter of the root crop, you need to sow plants whose aroma does not tolerate the colorad:

The more in the area there will be these plants, the smaller the number of pests will appear in the garden, and with a small number it is easy to handle mechanical collection. From various plants (tomato, dandelion, burdock, garlic, klopovnik, etc.) it is possible to prepare decoctions and infusions for spraying, but they are best used as an aid. In the table we describe the 7 most effective options for dealing with the Colorado.

There are no species of culture completely resistant to the Colorado, there are those that are affected to them in a small degree, for example, Bryansk reliable, Dawn Kiev, Zarevo, Good Luck, Kamensky, Lasunok, Nikulinsky, Temp, Early Morning.

Means prepared according to popular recipes, repellent plants give a good effect when fight against colorado potato beetlehowever, the most reliable are chemical preparations. It is necessary to use them strictly according to the instructions, without neglecting the terms of use.

How to get rid of ants on the siteAnts in the suburban areas play a positive and negative role. On the one hand, they attract birds, increase ...

To get rid of the annoying parasite is necessary when the first individuals appear, otherwise you will have to sacrifice part of the harvest. When alternating and combining several different tools, the Colorado potato beetle will not appear on the beds for a long time. 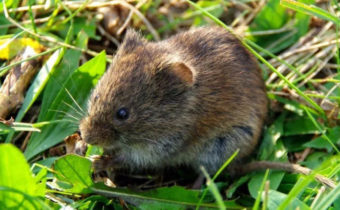