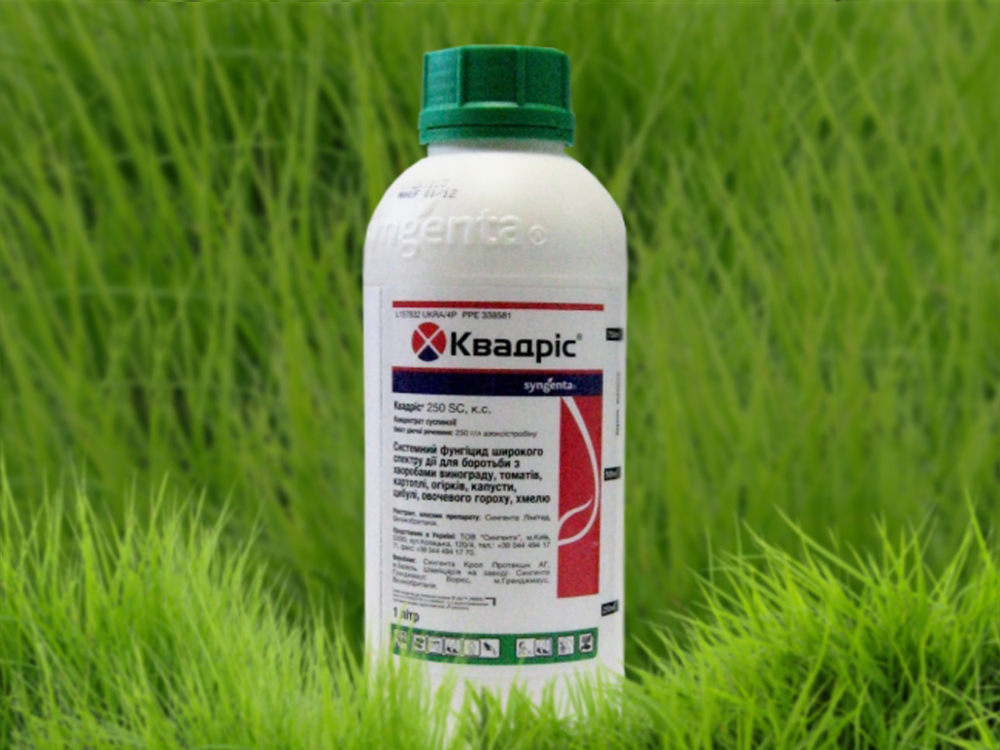 To combat tomato diseases that are caused by the spread of pathogens is very difficult. At high humidity and air temperature, spores of fungi multiply rapidly, causing irreparable damage to plants. To help vegetable growers, biologic chemists have created fungicide preparations that suppress the development of pathogens. Contact Microbial Neutralizer “Kvadris” is the best tool that protects tomatoes from fungal spores and pathogens. 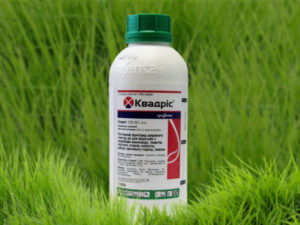 Thanks to the system-contact mechanism of action, the tool has advantages in the form: 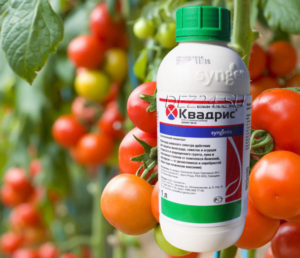 With a large number of advantages, the drug has disadvantages:

In order not to cause pathogen resistance to the Quadris action, the drug should be alternated with other translaminar fungicides.

You can treat tomatoes with the preparation not only from parasitic fungi, but also from viral infections:

The mechanism of action of the active substance

The active substance, azoxystrobin, penetrates from the treated side of the leaf to the untreated one, providing protection on both sides. Within two weeks, the whole plant is under the protection of the substance, including new leaves and stepchildren growing after spraying. Azoxystrobin is almost completely distributed throughout the tomato bush for forty minutes after treatment. 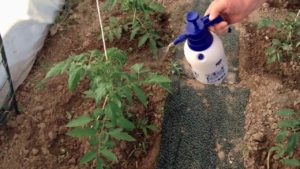 The organic compounds udemansin and strobilurin that are included in the preparation move acropetally through the vessels of the plant, detrimentally affecting only harmful fungal microorganisms. Useful microflora after spraying does not die. Chemical elements migrate through the plant, finding foci of fungal infection, inhibit lipid synthesis. Block a further increase in mycelium and sporulation. Udemancin is absorbed by a layer of wax on the leaves, due to which it is not washed off with water. Azoxystrobin has a good ecotoxicological profile, it quickly decomposes in the soil, and its toxicity is minimal for mammals.

Watering tomatoes can be an hour after spraying "Kvadrisom", because by this time the drug has completely penetrated into the plants.

The working solution of "Quadrice" is diluted by the standard method, applied immediately after preparation. Particularly effective are preventive spraying after identifying the first signs of fungal and infectious lesions.

When processing tomatoes from the top rot, together with the drug "Kvadris" in 1 liter of water to dilute 3 g of potassium chloride and 1 g of boric acid.

In the manufacture and use of the working solution to use individual protective equipment. Since, despite the low toxicity of the drug, its active ingredient at elevated temperatures evaporates, penetrating into the human body through the skin and hair. 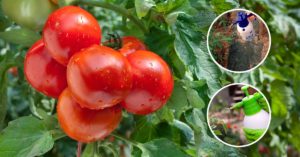 Reliable storage of the drug is achieved by its safety in places without sunlight. And also without access to the facility for young children and pets. Food should not be saved near the packaging. Permissible air temperature during storage is from -4 to +36 degrees. Observing the rules of storage, hermetically sealed drug stored for 3 years.

According to reviews of vegetable growers, the drug "Kvadris" is a good tool for dealing with many pathogenic diseases of tomatoes. And also safe and convenient means in use.