Often, summer residents plant the same type of vegetable crops from year to year, then in the autumn they complain that the land is bad, the weather is not so in our time, because the return from labor is small. Why do many of the old used to use the same things? And it concerns any sphere. Why not choose a new, excellent grade. Yes, here, for example, if we talk about tomatoes, the "Cardinal" justifies all expectations. Let's, about him in more detail. 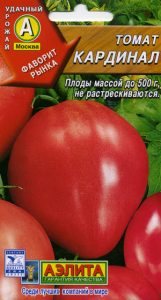 Characteristics and description of the variety

It is noteworthy that this variety has two varieties. One is called "Cardinal Raspberry", the other is "Cardinal Red." Both of these tomatoes are excellent candidates to win the heart of a summer resident once and for all. In principle, there is no particular difference except for the color of the skin between the varieties. Both are high-yielding (4 or more kilograms from a bush), if you follow competent agricultural techniques.Now you know about the Cardinal Tomato variety according to its characteristics a lot of useful information..

Crops are carried out in March, according to the calendar of lunar days. Before planting, seeds are pickled and soaked to stimulate growth. Many gardeners recommend not to buy a finished product, and use aloe juice. Steep seed material in it for 12 hours.

Planting is carried out in containers where garden soil mixed with humus is added. You can add ash. In order not to dive saplings, it is best to plant in peat pots by seed. After which they are placed under glass or covered with a film, which is removed after germination. The optimum growing temperature is 25-27 degrees. The soil is moistened with an atomizer.

If the sun on the street is not enough, then you need to put the lamps Before the seedlings are transferred to the open ground, they are shed with complex fertilizer and quenched in two weeks with the help of temperature reduction.

Planted in open ground in early June, in the greenhouse - in May. Props are made here in advance. The distance between the bushes should be left at least 80 cm. You can plant saplings in a checkerboard pattern, you can in a row. It is recommended to pour mineral dressing or ashes into the hole during planting. During the season it will take 3-4 more times to fertilize.

Water this variety moderately. If a shrub overgrows, then it is pinched. Also, stepchildren, lower leaves are removed, forming a two-stem culture.

That's all that we would like to tell you today. Great tomato, we advise you to plant it in the new season. 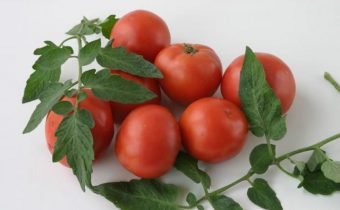 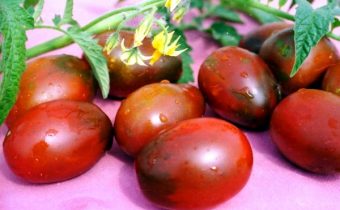 Tomato "De barao". Characteristics and description of the variety 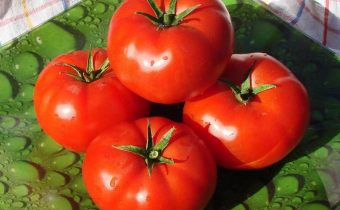