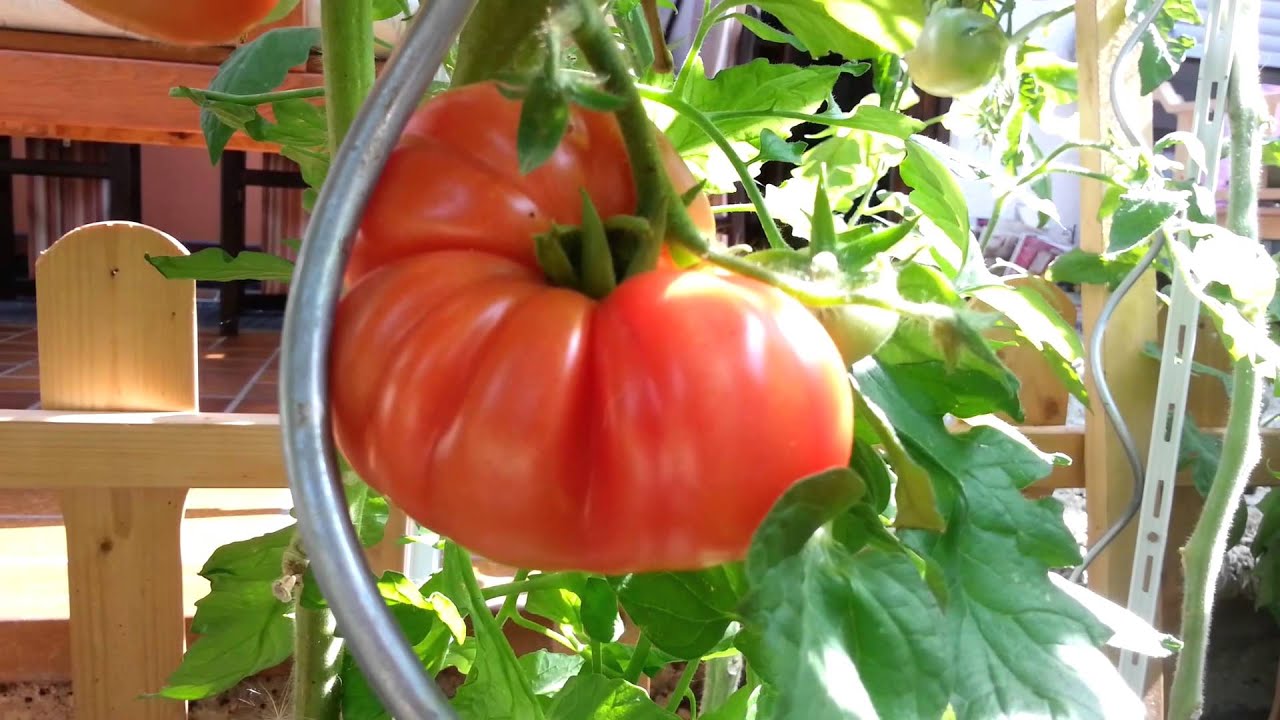 Experienced gardeners are grown in areas dozens of tomatoes, differing in color, size, collection time. Among the favorite - the largest indeterminantny varieties of tomatoes, which are planted in open ground, in greenhouses, tunnels. Their fruits are fleshy, juicy, tasty in salads, fresh. Thanks to the breeders, the Indians of the early and mid-maturity dates, gaining weight and mature, even in the harsh climate of most regions of Russia.

Tomatoes included in this group are distinguished by unlimited growth. The height of the bushes can exceed two meters, while creating a comfortable environment, each plant can form up to 40 brushes.

In the climatic conditions of most Russian regions, indeterminant varieties and hybrids are cultivated in greenhouses. They bloom and ripen later than the determinant types, since the first brushes are knotted after about the ninth or eleventh leaf. Plants are demanding for nutrition, need to form a bush, obligatory garter.

To obtain large copies of tomatoes also form a brush.

For such "giants" provide good illumination, a large area on the ridges, drip irrigation systems. In this case, the indeterminate varieties abundantly bear fruit and delight large fruits.

On ridges in the open, tall varieties are grown less frequently. To limit growth pinch the top (in early August), remove the fruit in the stage of technical maturity.

The best varieties and hybrids: 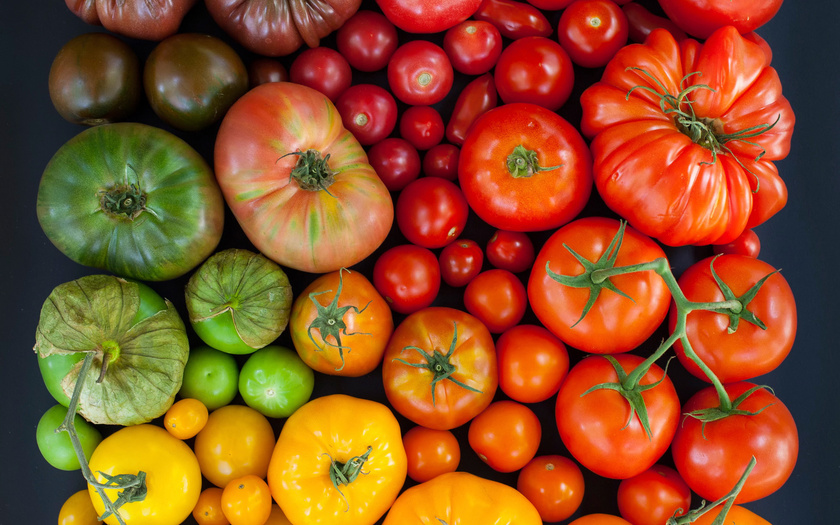 Varieties of tomatoes for the greenhouse, resistant to phytophthoraDiseases of vegetable crops can completely deprive the entire crop. Many of them can affect different cultures ...

For cultivation in shelters choose not only the early, but also tall sredneperki, as well as middle-late varieties. Over a long growing season, they manage to gain the desired weight, accumulate sugar and the required amount of dry matter. 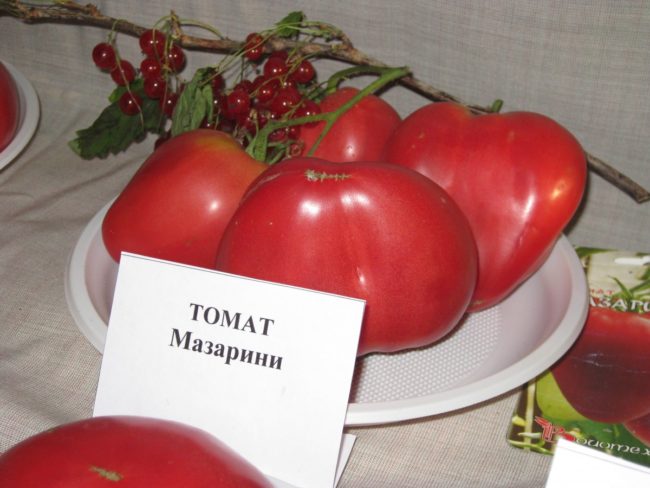 Recognized by many mazarini variety with large by weight fruits. Bright red tomatoes grow up to 300 grams, have a sweet taste and aroma.

Mazarin is praised for yield, low susceptibility to rot, fusarium, phytophthora. Most of the crop has time to form before the appearance of infections.

The fruitful cuboid shape will surprise this fruitful hybrid. The plants are tall, up to 1.8 meters. Demanding on watering, full feed.

Branches with brushes necessarily tied to the supports.

The fruits are fleshy, about 300-400 grams, pink-red color. Can be stored up to one and a half months, do not crack. 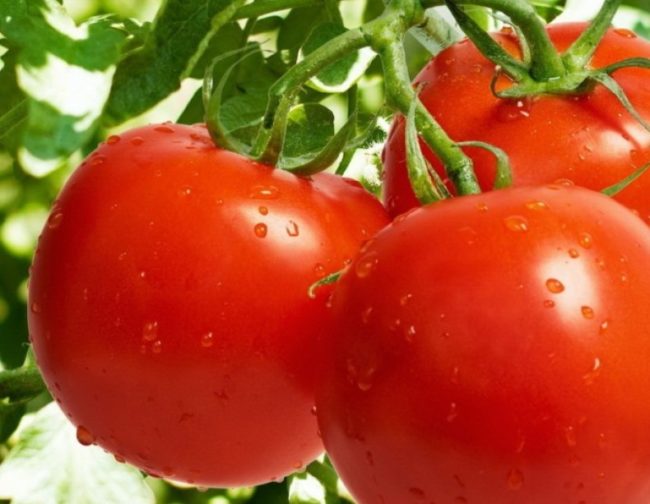 Reviews of this tomato are controversial, but gardeners agree on one thing: a large-fruited hybrid, fruitful. They argue about the taste, as one like tomatoes, others believe that the taste is average.

In order to get the sweet fruits of large size have to work hard. Hybrid needs good nutrition, lighting. Fruits grow under 350-400 grams, differ in keeping quality, suitability for transportation. 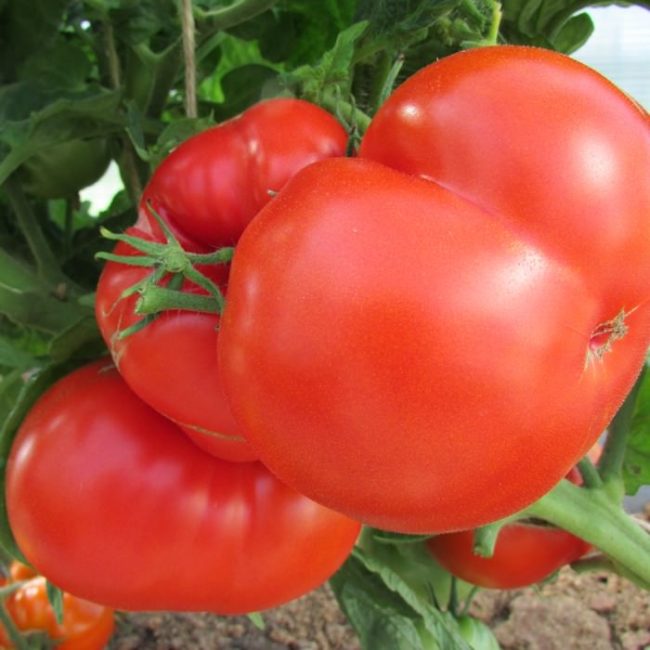 Recommended for greenhouses, although in the middle zone it is often grown directly on the beds of the plot. It grows under two meters, but gives a small amount of fruit.

Also on the juices and salads will the fruits of this large tomato. Raspberry Giant Tomatoes slightly ribbed, crimson-red, under 400-500 grams.

Bushes are tall and strong, up to 1.8 meters. The first brush comes after 9 leaves, usually the largest fruits are formed in it. They produce seeds of the company "Russian Garden", "Aelita-agro", "Plasma Seeds".

Tomatoes large for the south of the country

Varieties for these hot areas must withstand drought, otherwise the fruits will be standard sizes. 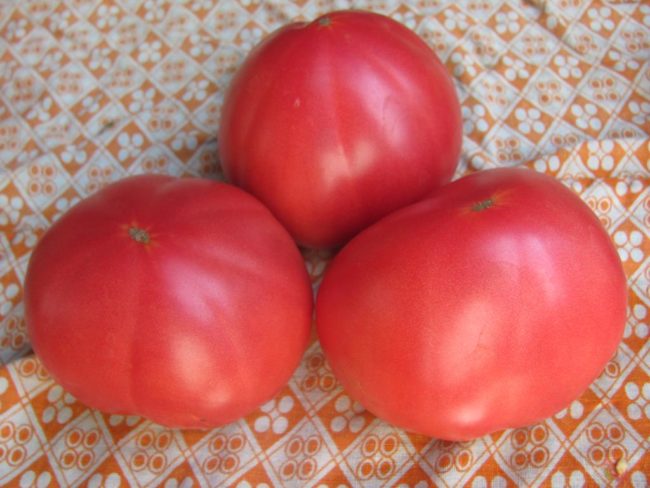 Sort Grandma's Secret in the southern regions gives good results on the ridges. The plants are two meters high, with fleshy tomatoes. By weight - 400-600 grams, sweet. Sour is missing. 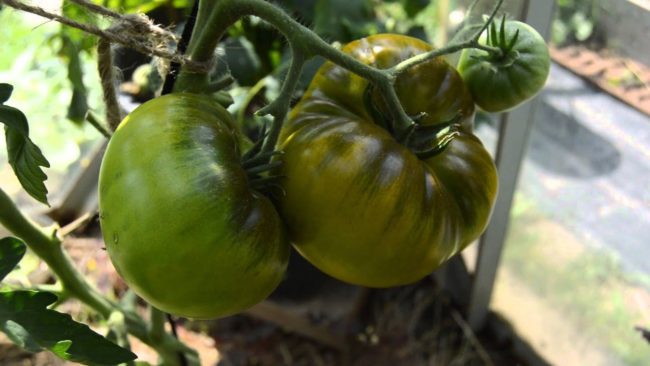 Crop variety with an interesting name attracts the color of the fruit. They are in his mature form bright green, with a lemon shade. The bush grows up to 1, 7 meters, from a plant collect up to 10 kg of tomatoes.

It is a little subject to illnesses, it is suitable for long transportations. 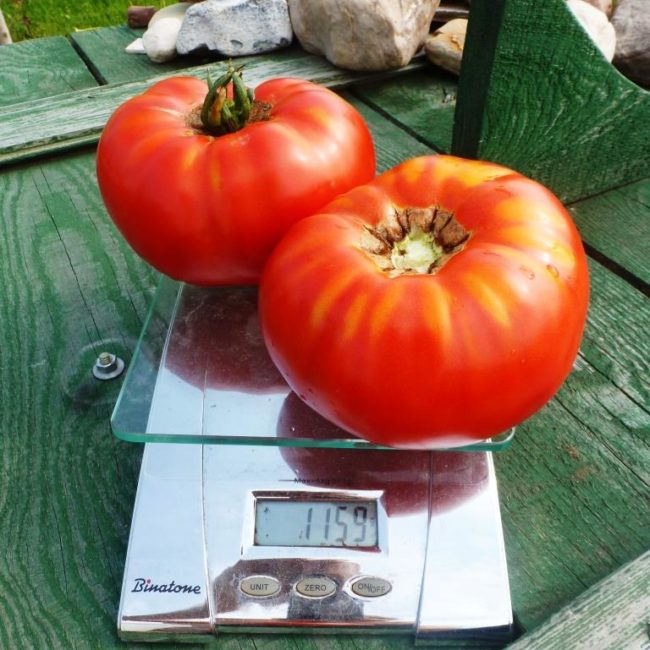 In the beef-tomato group, this variety stands out for its excellent taste, dense fleshy pulp with grain, and heavy weight. Tomatoes about 600 grams, when forming a brush grow to 1.2 kg.

A productive and disease-resistant tomato grows well in conditions of exhaust gas. The fruits do not crack, with small seed chambers, very fragrant.

Large varieties of tomatoes for the middle band

If possible, gardeners of this region cultivate tall varieties in shelters. This makes it possible to get the crop until late autumn, leaving the fruit to ripen right on the bushes. 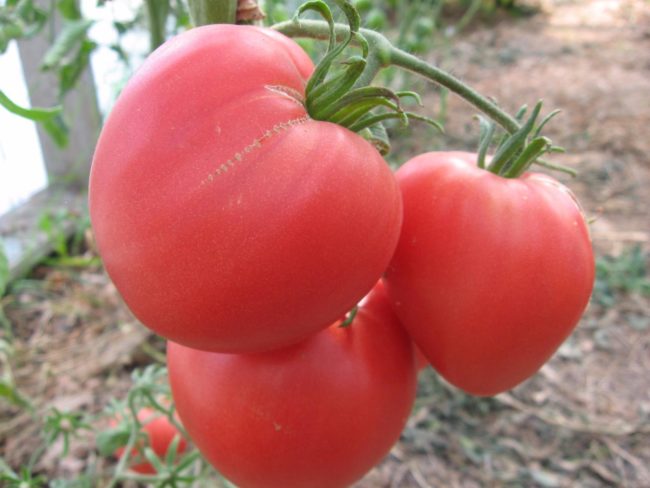 Favorite of many gardeners, is appreciated for the large weight of fruits and sweet pulp. Treats representatives of a tomato classics, differs in resistance to a fitoftor.

Tomatoes 500-600 grams are formed in the lower tier, a little less on the upper brushes. The variety is impressive taste, yield. Not inferior to the novelties of selection and always in the top of the favorite gardeners of tomatoes. 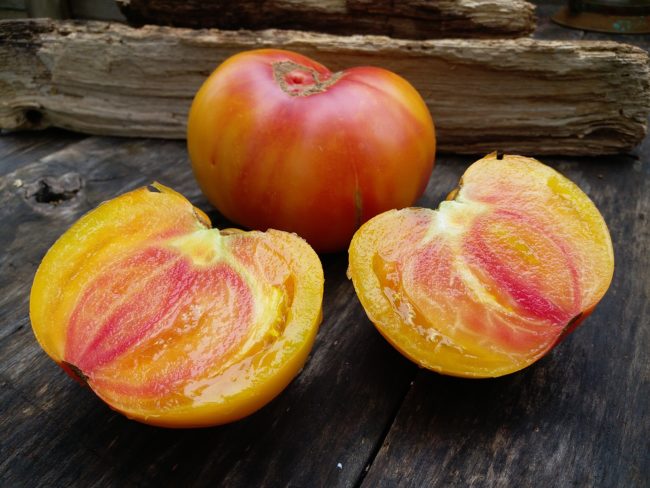 This variety is included in the group of medium late tomatoes. In Moscow, it grows well on ridges, expanding to a height of 1.8-2 meters.

Bright orange-pink fruits can reach a weight of 600 grams, but the average is 400-450 grams. The taste is very sweet, with pronounced honey notes. 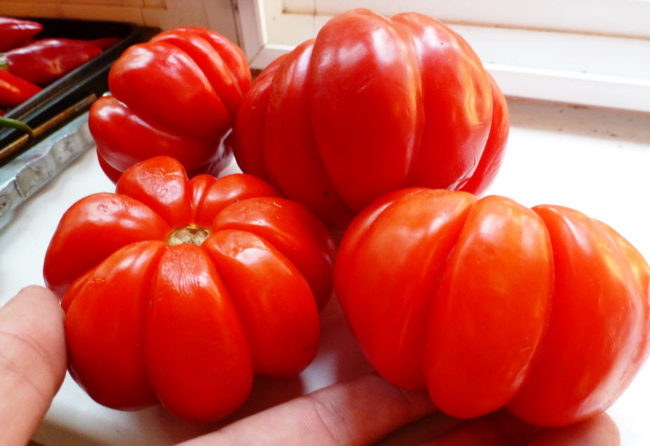 The harvest is ready for harvest in about 110 days. Shrub necessarily stepson.

Large-fruited tomatoes for the North-West, the Urals and regions of Siberia

In these regions, indeterminate varieties are planted in shelters. Try to choose zoned tomatoes, resistant to the adverse factors of the local climate.

Indeterminate varieties with large-sized fruits are always the focus of summer residents. By choosing a suitable variety for your region, even a novice gardener will be able to get an excellent harvest of tasty juicy fruits. 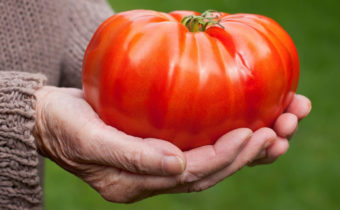 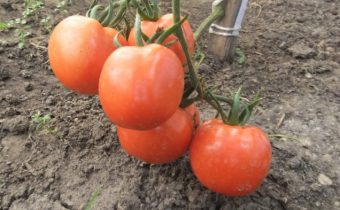 Variety tomato "Ural giant": each has a high yield on the garden 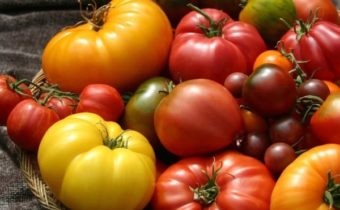 10 large, fleshy and sweet varieties of tomatoes for greenhouses 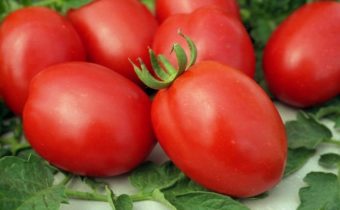 Top 10 most popular varieties of tomatoes
Previous post
What are the sweetest tomato varieties?
Next post
Lunar calendar for February 2019 for landing